You are here: Home » Welcome » History

Both of our recent predecessor congregations represent the strong ties and leadership within Milwaukee’s Jewish community, stretching our notable lineage back a century and more.

Our oldest institutional ancestor was founded in 1884 as Congregation B’ne Jacob. By 1886 it had split into two congregations, Moses Montefiore Gemeinde and Anshe Jacob, but in 1891 they re-amalgamated, creating Beth Hamedrash Hagadol, and the following year hired Solomon Isaac Scheinfeld as the congregation’s first permanent rabbi. This new congregation immediately began construction of a synagogue on 5th Street between Vliet and Cherry Streets, in what was then the center of Milwaukee’s Jewish immigrant community. High and over-budget construction costs for the building led the congregation to declare bankruptcy and reorganize as Beth Israel in 1901.

Rabbi Scheinfeld, after a brief stint in Kentucky, would return in 1901 and become the congregation’s rabbi for the better part of this first century, until his death in 1943. During his tenure, he established a ma’ot chitim fund to provide Passover food for those in need, which continues to this day as the “Rabbi Solomon I. Scheinfeld Maoth Chitim Fund.”

Beth Israel (CBI) occupied the synagogue on 5th Street until the early 1920s when the congregation undertook the construction of a much larger and architecturally significant synagogue building on Teutonia Avenue. Our current Glendale facilities were built in three phases and dedicated in 1962, 1966, and 1980, when the work on the sanctuary was completed. The lovely, ornate wooden ark and components of the bima from the Teutonia Avenue synagogue are installed in the chapel of our Glendale building where we hold daily minyan.

Beth Israel began as an Orthodox synagogue as Rabbi Scheinfeld also served as chief rabbi of the United Orthodox Congregations of Milwaukee. However, the congregation had done away with separate seating for men and women by the end of the 1930s, around the same time Beth Israel began including English language as part of its services. The congregation resigned from the Union of Orthodox Jewish Congregations in 1957 and affiliated with the United Synagogue of Conservative Judaism’s predecessor in 1968. CBI would become a fully egalitarian community through the 1980s—recognizing all Jewish adults as counting for minyan, serving as gabbaim and Torah readers, and otherwise carrying out halachic observances and mitzvot.

Congregation Beth El had already established the first Conservative synagogue in the state of Wisconsin with the construction of the original building in 1923, the first synagogue on Milwaukee’s West Side, at North 49th Street and Garfield Avenue.

In 1949 the congregation secured the funds to construct a new building on Sherman Boulevard, agreeing upon a new name, Beth El Ner Tamid (BENT). Under the leadership of Rabbi Swichkow (1937-1985) membership peaked in the early 1960s at over a thousand families. One of the most notable features of Beth El’s community in this heyday was the choir. In addition to providing frequent evenings of musical entertainment for community members, the choir also toured nationally under the combined leadership of composer and choir director Max Janowski and Cantor Norton Siegel.

Like many congregations in the late twentieth century, Beth El Ner Tamid witnessed a migration of their members away from the city, Milwaukee’s West Side, Sherman Boulevard to the suburbs. The congregation decided relocating to the North Shore made sense for remaining in closer proximity to its community and membership. In 1984 Beth El Ner Tamid opened a new synagogue on Mequon Road. Similar to BENT’s previous location, the Mequon synagogue building contained a large community space adjacent to the sanctuary, serving the dual purpose for overflow seating and worship on high holidays, and for members and their guests for kiddish and social gatherings.

By the 2010s members of Beth El Ner Tamid recognized even more demographic changes that would make maintaining the large Mequon facility untenable in the coming years. Leaders from Beth El Ner Tamid with President Bob Peterman met with the leadership of Congregation Beth Israel and President Nat Sattler to explore the possibility of joining Conservative congregations on Milwaukee’s North Shore. The process was approved by both boards and completed on August 27, 2012, with Beth Israel joining ‘Ner Tamid’ to its name in recognition of the coming together.

In 2015 the newly branded CBINT rolled out a new logo mark—the six-pointed, double-lined star, representing the two families into one; with a vibrant color scheme highlighting the colors in a flame—the eternal light connoted in the familiar Ner Tamid; and using a novel, organic, blossom or botanical structure suggesting the cyclical resilience of Jewish communities and of internal spiritual growth—turning over a new leaf.

We believe bright futures lay ahead when we put into practice the Jewish values that our legacy teaches us.

Below you can peruse the timeline sourced from John Gurda’s book, One People, Many Paths: A History of Jewish Milwaukee, Jay Hyland’s Encyclopedia of Milwaukee page on Beth El Ner Tamid Synagogue entry, and Nick Lee and Becca Schnabel’s report on Beth El Ner Tamid Synagogue for the Gathering Places Public History project organized by Professor Christopher Cantwell of the University of Wisconsin-Milwaukee’s Department of History department.

Moses Montefiore and Anshe Jacob acquired adjoining lots of land in the Town of Greenfield for a burial place, which became known as “Second Home Cemetery” in 1890. Congregation Beth Hamidrosh Hagadol organized in 1892 by the rejoining and consolidation of Anshe Jacob with Moses Montefiori Gemeinde at 462 Fifth St., B. Goldstein, Pres., Rabbi Solomon Scheinfeld is hired.

Beth El is founded as the first Conservative synagogue in Wisconsin, consisting of 70 families. The cornerstone was laid at Beth El’s first building at Garfield and 49thSt in 1923. 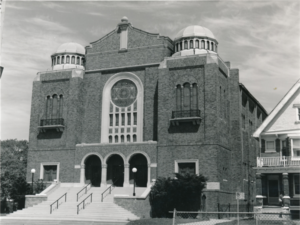 Beth El hires Rabbi Lewis J. Swichkow in 1937. He remained Beth El’s spiritual leader for nearly a half-century, until his retirement in 1985.

Beth El organized its formal choir in 1948. Beth El added “Ner Tamid” (Eternal Light) to the name of the congregation in 1949, and Beth El Ner Tamid dedicated the synagogue building on Sherman Boulevard in 1951. 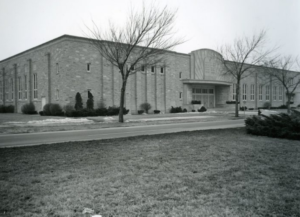 BENT hosts an impressive concert featuring renowned Chicago composer Max Janowski in February of 1957 and Cantor Norton Siegel arrives in August 1959. The peak of BENT membership — 1,030 membership units (about 3,000 members) in 1962. Rabbi Swichkow of BENT co-authors “The History of the Jews of Milwaukee” with Lloyd P. Gartner in 1963.

Beth El Ner Tamid dedicated the new Mequon Synagogue in 1984. Rabbi Goldenholz arrives at BENT in 1985; women are allowed upon the Bima as BENT makes large strides towards an Egalitarian institution throughout the 1980s.

Enid Bootzin Berkovits took over the direction of the Beth El Choir in 1988.  She directed the choir, sang with Cantor Norton Siegel as a cantorial soloist, then with Cantor Jerry Berkowitz, also participating in synagogue concerts. Her involvement with the choir stretches back deep into our history, as she was 12 years old when she began singing with the Adult Choir at Beth El under Max Janowski who encouraged and taught her, along with mentors Cantor Siegel, Shirley Saicheck, and Molly Slutsky.

Rabbi Jacob Herber arrives at CBI and remained the congregational spiritual leader until 2018 infusing teachings from his global affiliations into sermons and programs, as he participated in numerous international Rabbinic delegations.

Beth El Ner Tamid, known for its robust group of Torah readers, dedicates a Torah which the community scribed under the supervision of Rabbi Goldenholz.

BENT Memorial plaques are installed in CBINT’s Glendale synagogue chapel in 2014. CBINT develops and implements a new logo mark in 2015.

Rabbi Alter arrives at CBINT supporting an active Chesed Committee to attend to the pastoral needs of our membership and encouraging even more Caring Committees to seek out ways to heal what ails Milwaukee.

Amid the pandemic, and given the importance of connectivity, CBINT convenes a web redesign committee to update the website. It is rededicated and presented as a gift to the congregation on the first night of Hanukkah.